Can you tornado-proof your home?

You may not realize that Canada is second only to the U.S. in experiencing the highest number of tornadoes in the world. With such violent winds blowing, we are seeing an uptick in severe weather across the country that causes property damage and personal injury. So how can the average homeowner keep their property safe? 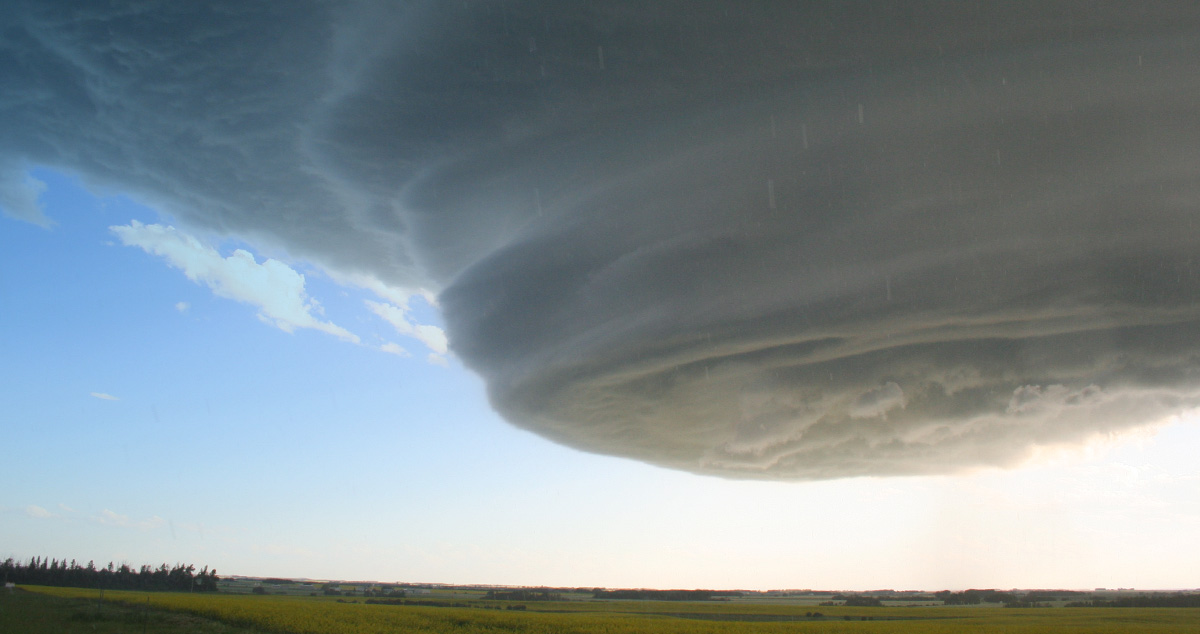 When it comes to wild weather, tornadoes are one of the first things that may come to mind — immediately striking both fear and fascination. Who could forget the thrilling blockbuster movie moments in Twister — not to mention that flying cow! But for people who have faced powerful and destructive winds in real life, there’s nothing entertaining about seeing that funnel touch ground.

These rotating clouds, born out of thunderclouds, can reach speeds of up to 500 kilometres per hour, leaving a trail of destruction in their path. Even the average tornadoes have wind speeds up to 170 km/h and measure 75 metres wide. A tornado of this size can uproot trees, flip cars, damage homes and wreak havoc for several kilometres before dissipating.

Even if you only witness these types of events on the news, the risk is out there.

In a typical year, Canada sees about 80 tornadoes, according to the Institute for Catastrophic Loss Reduction (ICLR). They’re common in certain regions, such as interior British Columbia, southern Alberta, Saskatchewan, Manitoba, Ontario, Quebec, western New Brunswick and P.E.I. — a vast tract of land referred to as Canada’s Tornado Alley.

While tornado season takes place from April to September, typically peaking in June and July, high winds and tornadoes can still occur most times of the year. And the problem is expected to get worse, thanks to climate change and increased development in at-risk areas like the Prairies.

For homeowners, these severe winds have serious implications. In 2018, catastrophic losses accounted for approximately $2 billion, according to the Insurance Bureau of Canada’s 2019 Facts of the Property and Casualty Insurance Industry in Canada.

“This was the result of many smaller catastrophic losses right across the country,” says the IBC report. “Unlike previous years, no one big event accounted for a large portion of this amount.

The data has shifted dramatically over the past decade, with the IBC noting that “over half of these losses (56%) were caused by wind, tornado and hurricane events, while from 2009 to 2017, the average amount of damage caused by these types of events accounted for less than a quarter of catastrophic losses (20%).”

If the trend continues in this direction, more homeowners in our country will be facing wilder storms and more forceful winds.

While you can’t completely ‘tornado-proof’ your home, there are steps you can take to mitigate the severity of damage and keep your family safe. In the event of a tornado, the Red Cross recommends heading to a safe location, such as a basement, away from windows and doors (in a high-rise, head to a hallway in the centre of the building).

Batten down the hatches! (And fix your home’s weak spots)

Since severe winds are a component of many catastrophes, the ICLR and Standards Council of Canada are recommending the development of a new national standard on wind resilience to mitigate property damage — with an emphasis on roof protection.

That’s because, in many cases, severe winds cause damage to a home’s roof and exterior. If shingles blow off or vents fail during a storm, then wind, rainwater and debris can enter your home, causing further damage and increasing the risk of personal injury.

“The concept of Building Back Better, referred to as BBB, is coming up a lot these days, especially in areas where these types of storms tend to happen,” says Nathan Ward, Adjuster - National Catastrophe Team with Wawanesa. From an infrastructure perspective, BBB is an approach to disaster recovery aimed at reducing vulnerability to future disasters.

Whether it's wind and tornadoes, or other disastrous storms, BBB has been proven to increase the safety and economic vitality of communities. While the concept of BBB extends further into the culture, infrastructure and environment of an area, your attention will likely first be focused on your own property. If your house or any other buildings have sustained damage, repairs should improve upon its previous state so that you’re better prepared in the event of a future disaster.

The same applies to proactive renovations. If your roof is old or showing signs of damage, re-roofing is a good idea, especially if you live in Tornado Alley. Replace damaged sheathing if necessary, and ask your contractor about wind-rated shingles (and hail-rated if possible), as well as wind-rated ridge vents. A wind rating is the force of wind it would take to blow the shingle off your roof. (Your contractor should consider the average wind speeds in your area to determine which wind rating is best for your home.)

And while catastrophic events certainly grab headlines, you’ll likely still face smaller storms and regular weather that can compound damage throughout any given year.

“In some areas, you don’t always have a tornado, but you’ll more often see hail and other wild weather. Many claims from the Prairies are related to the hail that comes with those storms,” says Ward. “Building Back Better is about mitigating the damage as much as possible. And by constructing your home and outbuildings to withstand major winds and violent weather, you may get through a storm relatively unscathed — potentially avoiding unexpected expenses.”

The first stage of preparing for strong winds is keeping an eye on the weather. Like most Canadians, this is almost a national hobby, so you’re probably well on your way. (We’ve all spent time with the Farmer’s Almanac over the years, and local weather people are A-list celebrities!)

When it comes to preparing your property, municipal government, public works and utilities websites can offer advice on how to protect your home. It may also be worth having a building inspector evaluate your home’s capacity to resist extreme winds, especially if you live in an older home.

Damage from wind and tornadoes is usually covered by homeowner insurance — as well as auto, condo, tenant, farm and commercial business policies. However, it’s best to discuss this with your insurance broker to understand the types of damage covered under your policy and ensure you have appropriate coverage. If specific types of damage are excluded or have specified limits within your policy, it’s crucial that you understand that in advance.

“Farm and commercial policies might provide a depreciated value settlement versus a traditional homeowner policy, which is commonly done at replacement cost. So that might be something to consider if you haven’t properly assessed the structures on your farm and commercial property in a while,” says Ward.

“Having a chat with your broker, who can give you all the details of your specific policy, will give you that reassurance and peace of mind that you’re fully covered.”

When it comes to wind and tornadoes, it’s a good idea to talk to your broker and have a plan that will protect your valuable home in advance of any wild weather event. Your broker can also review any updates to your property that could require policy adjustments, and ensure you’ve got the proper insurance coverage in place. The next time the trees start swaying and the storm rolls in, you’ll be ready.