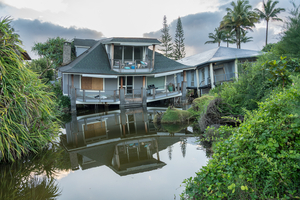 Having the earth suddenly open up and swallow your home is a terrifying thought for any homeowner. Although most common in areas such as Tennessee and Florida, a sudden hole forming in the ground does occasionally happen. Known as a sinkhole, this phenomenon can be difficult to predict, prevent or remedy.

Knowing how sinkholes form and what you can do to help spot them could help you avoid a disaster. It’s also important to understand whether or not your homeowners insurance covers sinkholes. This guide should help you understand more about your sinkhole coverage needs.

What is a Sinkhole?

Sinkholes are holes or cavities in the ground where water drains into the subsurface of the earth. This water drainage erodes the underlying rock layers and creates holes, caves and depressions. Areas with limestone sublayers are the most likely to form sinkholes, though they can form anywhere. In dry areas, for example, sinkholes can form after sudden, heavy rains.

Sinkholes can form as soil-filled holes in the ground or deep rocky cavities. In addition to natural formations, human processes, such as moving the earth of building a home, can cause a sinkhole to form.

The ground on the surface level usually doesn’t show signs of damage. As the underlayers of the ground erode away, you may not be able to see the depression forming below a building site. This can make it difficult to predict areas where a sinkhole may form or is already forming.

Sinkholes are rare in California and other states with generally low moisture levels. Unexpected heavy rains, earthquakes or other unusual weather can cause sudden erosion and formation of sinkholes. Knowing signs of a sinkhole and how to identify potential weak areas on your property could help you plan for a sinkhole disaster.

It’s difficult to predict where a sinkhole will form. Some ways to help you determine if there’s a potential for a sinkhole on your property include:

Especially in areas like California, where sinkholes are unlikely to occur unless sudden acts of weather, it’s important to watch the area around your home whenever there are heavy rains. If you notice an area where you suspect a sinkhole may be forming, you may want to have the area inspected.

Most standard homeowners insurance policies exclude coverage for sinkhole formation. Homeowners policies are generally valued based on the cost to rebuild the physical structure of your home. The value of the land on which your home is built usually isn’t covered. This means that a sudden movement of that land, including sinkholes, won’t normally be covered by a regular homeowners policy.

Some states have specific requirements for insurance providers in regards to offering sinkhole coverage as an additional coverage option for a standard policy. In the state of Florida, standard homeowners policies must also include coverage for a catastrophic ground cover collapse that is strong enough to make the home unhabitable. Homeowners in California and other areas with a lower risk of sinkholes are unlikely to have coverage for sinkholes in their standard home policy.

While sinkholes are uncommon in California, earthquakes happen quite frequently. Earthquakes can cause massive damage to many homes at once. The after-effects of an earthquake can cause additional damage as well. Landslides, fire due to damaged utility lines and sinkholes can occur as a result of an earthquake.

Do I Need Additional Coverage?

Sinkholes often form slowly and can be almost impossible to detect before they cause major damage. Most areas of California are unlikely to be affected by sinkholes, but heavy rains following drought or earthquakes may cause rapid erosion near your home. Having the right home insurance coverage can help you keep your home protected against an unexpected sinkhole.

Talk with your agent today to learn more about coverage for sinkhole damage caused by earthquakes.