What Happens When Someone Drives Without a License 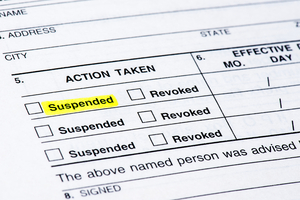 You know you have to take a driving test and pass a written exam to get your license. After passing your tests, you’re supposed to follow safe driving habits and the rules of the road to keep you and other drivers safe. Failure to do so could result in a loss of driving privileges.

You may wonder what happens if someone loses their license but continues to drive anyway. Driving with a suspended or revoked license is never a good idea. See how driving without a license is dangerous and what penalties California puts on drivers who choose to drive without a license. Find out what to do if you’re ever in an accident with someone who doesn’t have a legal license.

Where are People Driving Most Without Licenses?

Many drivers who have their license suspended or revoked lose their license after recurring moving violations, DUI, or a severe hit-and-run accident. It may not come as a surprise that drivers without licenses are involved in fatal crashes at a higher rate than drivers with legal licenses. A driver who lost their license and continued to drive may not be as concerned with driving safely.

According to a survey by Insurify, 2.59% of drivers in the United States reported driving with a revoked or suspended license. The survey revealed there were several cities across the country that were more likely to have drivers without licenses.

Reston, Virginia took the top spot with a reported 14.69% of drivers hitting the road without a legal license. The only California city to make the list, Orangevale, CA, ranked number 4 in the top cities with unlicensed drivers. The State of California, however, had a high rate of fatal accidents that involved drivers with invalid licenses, at 18%.

It’s illegal to drive with a suspended license or without a license at all in all 50 states. Driver’s education and a driving test help keep everyone safe on the road. A driver who never passes their driving test but decides to drive anyway puts everyone at risk.

In similar ways, a driver who has had their driving privileges revoked but choose to drive anyway also creates danger for other drivers and passengers. Someone whose license is revoked for multiple DUI and drunk-driving incidents has shown they’re likely to drive after drinking. As drinking and driving caused more than 10,000 deaths in 2017, it’s easy to see how a repeat DUI offender could increase the risk of an accident.

Even a driver who lost their license due to repeated speeding tickets can increase the risk of accident for others on the road. While most drivers speed occasionally, someone who has lost their license from consistently driving over the speed limit may be more likely to lose control when driving too fast.

Penalties for Driving with No License or a Suspended License

Penalties for driving with a suspended, revoked or otherwise, invalid license are generally harsh. Drivers who never had a license may see fewer penalties than those who drive after losing their license. You are still likely to be charged with a misdemeanor instead of a traffic violation if you are pulled over but have never had a license.

Left Your License at Home?

Driving without your license physically in your car isn’t the same as driving on a suspended or revoked license. If you’re pulled over and forgot your license at home, you may face a ticket. It’s not uncommon for this ticket to be dismissed if you bring your valid state driver’s license to your court date. The court may require you to pay a fine for not having your license, but it’s unlikely you’ll face any lasting charges.

Car accidents are never a fun experience. A car accident with an unlicensed driver can make the situation even less desirable. If you’re involved in an accident and the other driver doesn’t have a valid license, you should follow the same protocal as any other accident. You should never admit fault at an accident, but it’s worth noting that even if the other driver is unlicensed, you can still be found at fault.

Unlicensed drivers, however, may not be covered by insurance, even if the vehicle they’re driving is. Most insurance policies are invalid if the driver is not legally allowed to operate a motor vehicle. As such, you may have a difficult time getting the money to pay for damages if you’re in an accident where an unlicensed driver is at fault.

Having the proper coverage selected for your auto insurance policy can make it easier to get the car repairs you need after an accident with an unlicensed driver. With collision coverage, your auto insurance provider usually pays for damages, minus deductible, and then tries to recoup the expenses from the unlicensed driver if they are found to be at-fault for the accident.