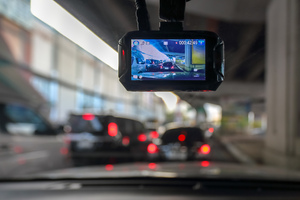 Staged car accident scams lure drivers into a trap to cause a small accident. The scammer's car is damaged slightly and you’re at fault for causing the accident. You exchange insurance information and file a claim so the other driver can get their car fixed. The other driver instead pockets the money to have the car repaired.

Many drivers don’t even realize they’ve been part of a scam. After an accident, it can be difficult to tell if it was staged. Using a dash cam to take a video of the accident in real-time can help cut down on the number of staged accidents that are successful.

Get a better understanding of fraudulent accidents and how you can avoid them. This article details different staged accident tricks and how adding a dash cam could save you time, money and stress.

How do Staged Accidents Hurt Other Drivers?

The most obvious way in which a staged accident causes harm is the possibility of injuries or fatalities. Most fraudulent crashes rely on a small accident taking place, such as rear-ending the scammer's vehicle. While small accidents usually cause little physical harm, they can easily turn into more dangerous situations as cars go past or are accidentally involved in the crash.

Staged accidents that are successful are also likely to increase your insurance rates. After the claim is filed to fix the scammer’s car, you’ll be considered at fault for the accident. If the scammer gets away with it, you’ll probably see your rates go up due to causing an accident.

It’s difficult to determine who is telling the truth in a potentially staged accident. Many times, the fault of the accident comes down to your story versus the scammer. With no way to accurately determine if a scam took place, you may have to pay the price in increased rates and a blemished record for an accident you didn’t cause.

According to the National Insurance Crime Bureau it’s estimated that insurance fraud costs the average US family between $4,000 and $7,000 in increased premiums over a 10-year period.

There are four main types of staged accidents used by scammers:

How to Help Avoid Falling Victim to a Staged Accident

It’s difficult to determine if an accident was staged. At the time of an accident, there are usually few witnesses or concrete proof the scammer did anything wrong. Most staged accidents are designed so you, the victim, look to be at fault without question. The accident then becomes a case of “he said, she said.”

Use these tips to help reduce your risk of being in a scam accident:

How Can Dash Cams Help Protect Me from Fraudulent Wrecks?

Installing a camera on your dash will likely provide important evidence if you’re involved in a staged accident scam. This provides hard video evidence of what really happened in the accident. You’ll be able to present a stronger case than relying on witnesses who may be involved with the scammer or innocent witnesses without a good view of what happened.

Staged accident scammers make a point to set up accidents so they seem to be your fault. It’s nearly impossible to prove a scammer slammed their brakes on to cause an accident if you happened to be looking away from the road in front of you. Setting up a dash cam gives you insurance company the evidence they need to help you fight against the fraudster.

What Should I Do if I’m in a Staged Accident?

Start by following the normal steps for what to do after an accident. Make sure you contact the police right away. Don’t try to engage with the scammers, as they may become dangerous to you if you accuse them of a fraudulent accident. Wait for the police to arrive instead and let them know that you believe this was a staged accident, preferably in private.

If you have a dash cam installed, make sure that the police know so they can collect the video. Contact your insurance agent and let them know what has happened. At Wawanesa, we work hard to make sure our customers don’t get hurt by insurance scams like staged accidents. If you’re in an accident and suspect fraud, we’ll do our best to provide you with the best legal defense available, and legally cooperate with the Department of Insurance Fraud Division, your local District Attorney's office, and other counter fraud agencies.