Why Does Traffic Happen? 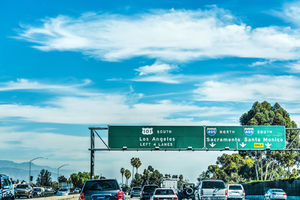 Traffic is a well-known annoyance for California drivers. Even drivers who live outside of major metropolitan areas have likely experienced a heavy traffic jam from road construction or an accident. Many face heavy traffic each day on their commute to and from their jobs. In a study by INRIX, three major California cities ranked in the top fifteen of US cities for most traffic congestion. Los Angeles, with over 100 hours a year spent in traffic, was ranked highest in the world for traffic congestion.

Although almost every driver has dealt with traffic, few realize why it happens. Traffic happens from a roadway having too many cars on it at once. If the road doesn’t have space for all of the vehicles, people have to drive slower and closer together to fit more cars. This guide will help you understand how traffic starts and why it happens.


How Does Traffic Start?

Several factors can cause a road to have too many cars and thus create a traffic jam. Most people assume traffic happens from car accidents or a stalled vehicle. Road construction also takes a lot of blame for causing traffic. While it is true that accidents and construction create a lot of congestion when they happen, much of the day-to-day traffic jams on a commute, however, are caused by drivers’ decisions.

A car accident on a roadway can quickly bring movement to a halt. Drivers must stop for the accident and allow emergency vehicles to maneuver. Even a large highway can have several lanes of traffic completely closed for a car accident. The entire time a road is closed due to an accident, more cars are entering the roadway and joining the already slow traffic.

Even the smallest of adjustments by one driver can cause a massive traffic jam. The jam, not caused by an obvious factor such as an accident, is sometimes known as a phantom traffic jam. Each time drivers slow down or speed up affects the flow of traffic around them. This flow then ripples through the other cars in the area. For example, a driver who cuts into the adjoining lane suddenly makes the drivers behind them slam their brakes. This carries on to each of the cars behind and causes a slight slowdown. Congestion is caused as these bursts of slowdowns allow time for more cars to enter the roadway.

Roadways that are facing too many vehicles for the amount of space can take a long time to clear. Known as a traffic wave, as cars slow down, the roadway gets more congested. When cars begin to accelerate in waves, the most congested part of the roadway moves backwards down the line. Traffic finally disappears when the wave reaches an area with the correct number of cars for the roadway.

A Japanese study created a phantom jam and the resulting traffic wave. Using a single track, the researchers instructed drivers to maintain the same speed and distance between one another. After some time, drivers began to speed up or slow down on accident. These small adjustments created a ripple effect around the circle. Each car slowed and sped to meet the speed of the car in front of it and attempt to maintain the same speed. The shifting speeds created a shockwave of braking and accelerating throughout the circle.

In addition to being annoying or frustrating, heavy traffic can cause a ripple of negative effects. Drivers who deal with traffic may face emotional effects. Some drivers might find it more difficult to estimate the time needed to get to a destination. Daily commutes with heavy traffic create delays as drivers make their way to work. These delays contribute to stress when people are late to their jobs as well as wasted time. Stressed drivers are more likely to engage in road rage. This angry reaction to traffic can be dangerous as drivers make rash decisions that may lead to an accident. Using defensive driving techniques can help keep you safe in congested traffic.

Negative aspects of congestion on roadways, however, include more than drivers’ stress levels. As traffic stops and starts, cars burn fuel at a less efficient rate. A less efficient vehicle creates higher costs of gas for drivers and adds to pollution in the air. Additionally, a roadway with heavy congestion makes it difficult for emergency vehicles to get to their destination. Should an ambulance or fire truck come upon heavy traffic, it may not physically be able to find a route through.

The negative effects of heavy traffic create dangerous roadways. Angry, careless or distracted drivers in congested areas can quickly make a mistake that causes an accident. Being properly insured helps protect drivers and their vehicles from traffic accidents. Choosing a car insurance policy that cover uninsured motorists, for example, may help pay for damages from an accident with an uninsured driver in heavy traffic. See policy options and get a free quote today to help protect yourself from the dangers of roadway traffic.